Environment and Peoples in America, 1607 to the Present 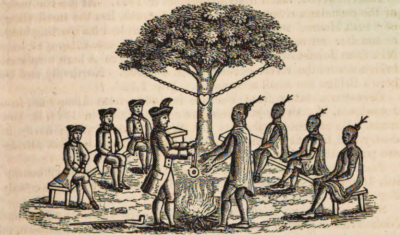 Treatied Spaces has been awarded a Standard Research Grant valued at £931,042 by the Arts and Humanities Research Council of the United Kingdom for the project ‘Brightening the Covenant Chain: Revealing Cultures of Diplomacy Between the Crown and the Iroquois Confederacy’. This 42 month project will begin in 2021. If you would like to be involved, please contact our Research Assistant, Dr Susannah Hopson.

To the Cree of Saskatchewan, he is ‘Pisimwa Kamiwohkitahpamikohk’, meaning ‘The Sun looks at Him in a Good Way’. We know him as Prince Charles. To the Salish of British Columbia, she is ‘Mother of all people’. We know her as the Queen. This interdisciplinary project investigates the deep but unexplored connections embodied in these names, between the British Crown and the indigenous peoples of Canada and Northeastern America – one of the oldest diplomatic relationships in the world. It shaped the North America we know today and continues to be ‘brightened’ and renewed by the Royal family because of its vital role in addressing global challenges linked to the legal, environmental and territorial resurgence of indigenous rights.

2024 marks the 260th anniversary of a pivotal juncture in the first ‘special relationship’ between America and Britain, a massive and expensive diplomatic pageant known as the Treaty of Niagara, when the Indian ‘Magna Carta’ confirmed Native rights and sovereignty over vast lands and resources. This project uses this and other treaties as lenses to reveal cultures of diplomatic interaction between the Crown and indigenous peoples that are rooted in the 17th century but of increasing global significance today. The project is the first of its kind to examine this globally significant diplomatic relationship in depth and scope. Over the 42 month project, we will:

Seven interconnected workstreams undertaken by 5 core applicants and 2 PDRAs will bring texture, clarity and nuance to this under-researched topic and transform the way that we understand the history of the British Crown, its empire, and the contemporary relevance of its intercultural past. To bring this past into dialogue with the present, we will co-create: